What can we learn from Animals being hunted? 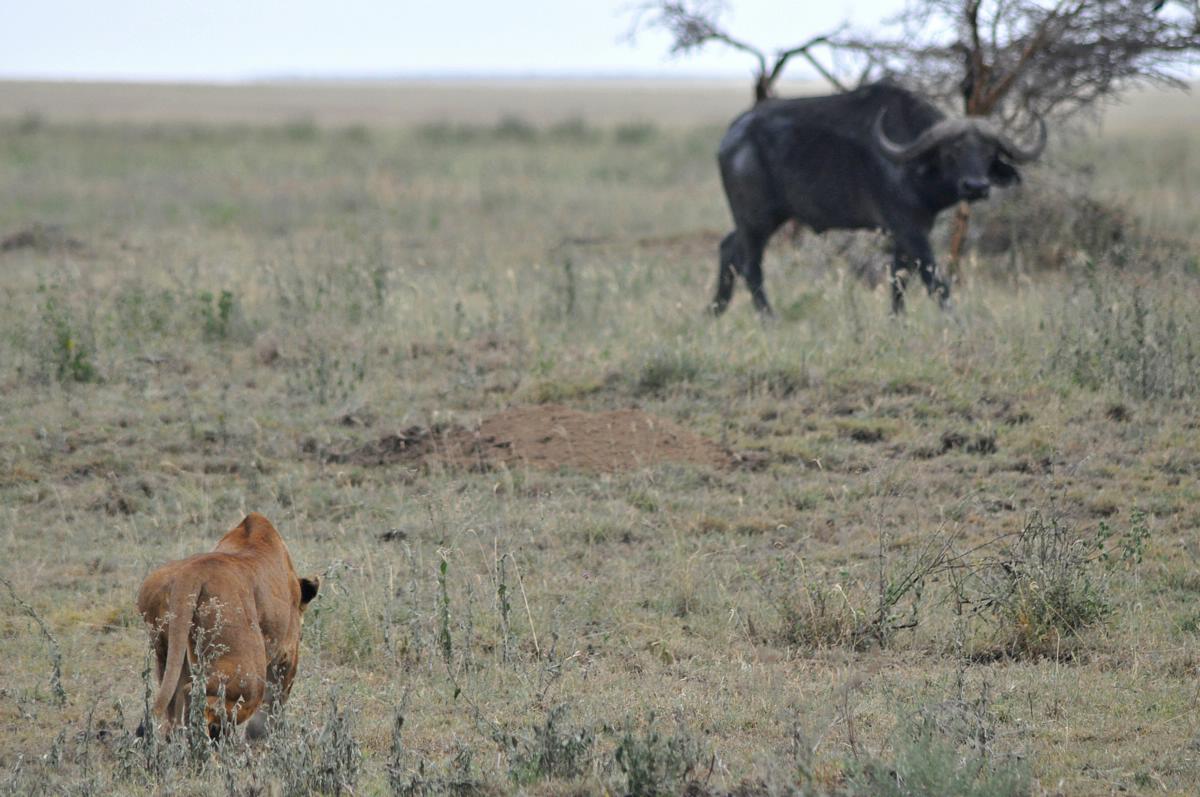 What can we learn from studying animals hunting/being hunted?

Animals have come up with hundreds of successful efficient hunting strategies in order to catch their prey, many predators will rely on outrunning, outweighing or out-muscling their prey but there are many ways other than size or speed to get a successful catch. After all, dinner tastes just as good whether you’ve tricked it, tased it, punched it, paralysed it‚ or just spit at it hard enough to knock it over.

To knock insects on low-hanging leaves into the water, the archer fish shoots them with a precisely aimed fountain of spit, then swims over to retrieve the new meal.

Wielding the fastest punch in the animal kingdom‚ its clubbed arms reach speeds of 50 mph‚ the mantis shrimp maims its prey with only a few blows.

Fish reflexively turn and swim in the opposite direction when they sense a disturbance in the water. The tentacled water snake positions itself with its tail on one side of a fish and its head on the other. When the snake flicks its tail, the fish swims straight into its mouth.

The trap-door spider hides in a tunnel behind a camouflaged door of twigs and leaves. When an unsuspecting insect walks nearby, the spider reaches out and pulls it into the tunnel to eat.

After driving a shark towards the surface, killer whales stun it with a swift smack. Since sharks enter a state of paralysis when upside down, the whales grab the shark and flip it over, turning a deadly enemy into an easy dinner.

When an enemy is within range, the crane will slap with its wings and stomp with its feet, thereby creating openings for impeccably timed beak strikes. Its long, flexible neck enhances its attacks.

The animal coils its body for speed and power, then strikes without hesitation or fear. It’s a relentless hunter that uses every muscle to push, slide, penetrate, wrap and eventually control its prey

A ferocious meat eater with strong bones and muscles, the tiger is physically gifted for combat. It boasts thick legs, huge paws with sharp claws, and an enormous head with razor-sharp teeth and powerful jaws. Its sturdy mid-section, back and neck help it generate maximum ripping and tearing energy. It hunts with great stealth, instinctively using ninja-type tactics to hit its prey from behind. The tiger’s speed comes from relaxed muscles; the more relaxed they are, the more quickly and silently it can move. Filled with pure power, its thunderous roar induces shock and fear in its enemies.

I especially like this video as its shows a wide variety of hunting strategies with successful and failed attempts (you can see the margin for error is very small between success and failure) many of the strategies shown are similar to one another but with different outcomes due to timing of attacks/ aim of the attack on the preys vulnerable spots, using the environment (drowning prey, knocking running prey into water, taking advantage of distractions e.g. Prey fighting each other), ambushing prey which are fleeing or passing by, getting lucky because the prey makes a mistake e.g. Trips over something, loses balance, fighting multiple opponents, using teamwork to overwhelm larger prey.

The failures we see are a female lion getting too close to the running zebra who bucks the lion in the face. Lesson for the lion, watch your distance from the opponent be aware of any possible dangers prey could inflict at any time, to avoid this incident the lion should run to the side out of line of the zebras back legs, from here it is safer for the lion as it can sweep/claw at the legs with its paws or run alongside the zebra and try get its teeth into the zebras neck bringing the hunt to a quick end.

Another example includes a young Lion getting pushed along the ground by antelope as it made the mistake of not avoiding its horns. This lion looked quite a young hunter I’m guessing it made a big mistake in its attack and its prey took full advantage to counter attack and make its escape, hopefully the lion will realise where it went wrong and not repeat its error or it will soon starve to death.

The behaviour of the antelope here is a very interesting one as it simulates a self-defence situation and shows how we as martial artists would use our skill and training, not to be a predator but to be able to fight off predator’s if the need arises making them regret there foolish attempt followed by a swift escape.

Assess situation and plan response to avoid detection, being silent seeking refuge, camouflage self, the prey try to avoid encountering the predators in the first place by avoiding known habitats occupied by predators and by being active at different times in the day to the predators. some examples include decorator crabs they can attach external objects including plant matter or stones, to their bodies to allow them to better match their background, Behavioral postures and movement can also allow animals to disguise themselves; chameleons and walking stick insects mimic the motion of plants in the wind to avoid detection, and the mimic octopus takes on the shape of dangerous or unpalatable animals to deter predators. Animals can also camouflage their scent cues. Squirrels do this by chewing up shed rattlesnake skin and spread it on their fur, thereby masking their scent and identity as potential prey”.

If the above has failed the prey has to make a decision whether to take flight, use deception by intimidating using scare tactics or fight back to deter predator from attempting to kill and eat them or most likely to create an opening to be able to escape.

Prey can work out successful responses to specific predators by understanding there tactics, motives and behaviours (predators however do the same thing working out the preys tactics and behaviours so both prey and predators have a tough time outwitting the other). The prey also need to judge the potential risk to themselves and decide an action plan, the risk maybe very minimal and not even need time and energy being wasted which could be put towards finding food or mates.

The above can become useful and be put into context for humans as there are nasty people out there, being prepared to act with an effective plan of action to detect them/avoid/survive encounters could be crucial for us to avoid or minimise dangerous situations before or as they arise. The context of potential threat comes into play too as running away or avoiding every possible potential threat is no way of living and would lead to a very boring lifestyle and lead to many unfulfilment’s in life.

Crocodile attempts to eat an anaconda snake, the snake is killed but the crocodile dies soon after as it’s unable to escape the snake which has coiled around it. Lesson avoid dangerous situations, assess each situation before you plan a response and don’t get involved especially if the risk for danger is high or you’re not adequately prepared for the task.

The hunters start their training from a very young age through play and learn through trial and error a kitten’s, for example, mother will often (if given the opportunity) bring an injured mouse for the kittens to practice their fundamental hunting skills, letting it go and re-catching it, effective holds to immobilise prey, effective areas to claw/bite to weaken, tire, maim and eventually kill,  this often goes on for over an hour with a single mouse cruel but fundamental for the kitten to practice its skills as a hunter as it will become a lot harder to catch and kill fully fit prey so it must know what its dong, they will also watch their mother stalk and hunt, which they then copy and practice for themselves, to begin with this nearly always ends up with failure not even getting anywhere near the prey before it spots the danger and flees however with practice they improve and learn to hunt more realistically choosing types of prey within their ability to catch and kill.

All species have different strength and ability’s which make these hunting methods work for them, any hunting strategy no matter how effective will not work 100% of the time as the prey also has methods of their own to escape.
We can use this method of using any means necessary to accomplish our goals, as long as there’s no major side effects e.g. damage to our joints, leaving ourselves vulnerable, breaking the law/breaking the rules in competition etc.

There are things out of the ordinary we see at competition which give the individual the upper hand in the fight, e.g. Bryan’s scare tactics leaving the victim wanting to either defend/flee or freeze and get whacked. Marks Nevola’s throwing the Gyaku Zuki as soon as the match begins, many opponents are not ready to defend quickly enough at this time. In a pro MMA cage fight a fighter uses the cage as a wall to run across before delivering a knock out roundhouse kick to his opponent risky but practiced enough by the individual to make it consistent and effective enough to use in a competition.

Everybody has different strength’s we as martial artist have to experiment and find those strength’s and work on training and improving the techniques which work best for us, it’s also handy to have a few tricks under our belt (as above) to give us the edge in a tight situation, most of the time however it is our fundamental skills which must be correct in order to fight effectively feet/posture/mindset/ power sourcing, as without these none of our actions will work as well as they should and will give the opponent easy opportunities to turn our mistake against us.

From analyzing hunters and the hunted I have learned that animals do many of the things we strive to learn and work towards in our martial art training and that we too could get to a similar level of skill if we did martial arts every day of our life’s and our life’s depended on it as is the case for wild animals who have to either fight for every meal or fight to avoid being eaten on a daily basis, having this mental approach of a hunter I feel would motivate us to train to the best of our ability’s and helping us to train with controlled aggression  /unpredictability (being relaxed springing quickly into moves) /focus (being smart conserving energy making moves effective/using strategy choosing the right response for the situation and finally just remember be positive belief in yourself this is the first step to success.